Stage lighting can run into pretty high expense for those who own a lot of it.  Clubs, live music venues and independent DJs all run into significant cost buying equipment that looks more professional than something you’d buy for your teenage daughters slumber party.

So I was surprised to find the HiBeam K800 laser unit on Amazon.in for a very reasonable 4150 INR, around £45 at time of writing.  I was slightly concerned when the item arrived in an opened manufacturers box, but that’s not unusual here in India – the concept that when you buy something you’re the first to own it is slightly foreign and the sale of “open box” goods as new units is common. 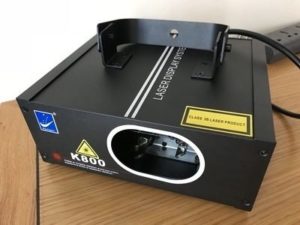 Still thankfully there didn’t appear to be anything wrong with it at first glance.  Construction seems reasonable though I’d question how well it would last in the long term.  More professional choices would surely come with padded cases to prevent damage on an item which is designed to be transported around frequently.  The extruded aluminium case is well coated in black (all published materials show it in red) and the fixtures and fittings on the chassis and the mounting hook all seem well put together.

To the rear of the unit there’s DMX in and out ports, along with a series of dip switches for choosing the usage mode and sorting the DMX addressing.  If you don’t want to use DMX the unit also has a mic at the back along with a sensitivity control.

Unfortunately the instruction manual is not great and I’ve not yet been able to ascertain if I’m even in DMX mode or if it’s making use of the built in mic, it just seems to be changing scenes at random on its own whim.  This is disappointing to say the least.

That being said the quality of the light coming out of this unit is much, much higher than you will find on cheaper laser units on Amazon.  Rather than a small repeating patten you are treated to a wide and far reaching display which covers a 5m wide wall at a distance of around 7-8m.

In the video above you can see this thing chucks out a lot of light, even in an open room.  I can’t wait for my planned 80s night in a few weeks to see how it works in a proper club/disco environment!