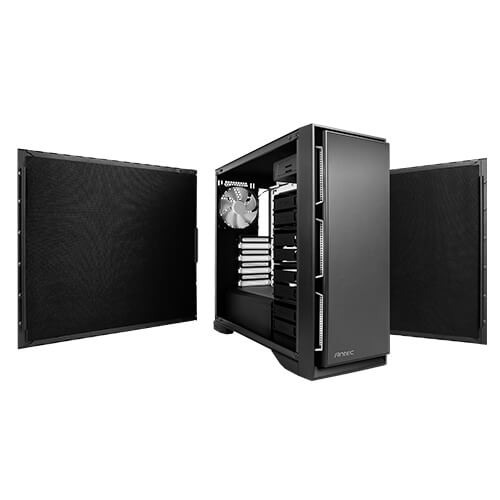 A while back I was promised a P101 by Antec, the first review sample I would have received since deciding to blog again. Problem is they never actually sent it, I had a meeting scheduled with their PR guy which was cancelled, and then silence.

I’d already commited to the idea of using it for a home server build, so I’d have to go out and buy it myself… It better be good.

As the name indicates, the P101 Silent is designed to keep your system running as silently as possible. There’s no glass panels on the sides, no mesh at the front or vents at the top to facilitate cooling. These things all allow a sound path out of your machine which just wouldn’t be acceptible.

Instead what you’re left with is a rather minimalist looking case, which in a time where literally everything PC related HAS to have RGB is quite refreshing. First impressions are that the P101 Silent is very well made, the finish on the steel panels is fine and the shut lines for all of the panels line up well.

I must admit to feeling Antec have really sought to address a lot of the quality issues that have dogged them in recent years, this really does feel like a premium project, and MAN is it heavy!

That’s not surprising given its size, the P101 stands 506mm tall, 527mm deep and 232mm wide. Stick it next to a more meager case like Corsair’s Carbide Series Spec01 as shown below and the difference is clear – this case really stretches the limits of what we can call a “midi-tower”.

The height of the case is nudged up by a nice amount of clearance from the table of around 25mm, more than enough that you can place it on a thick pile carpet without having to worry about choking the life from your PSU. The bottom features a decent sized dust filter, but on the downside is has to be removed by pulling from the back of the chassis. This could present a problem for those who have limited space on their desks as it essentially means you have to move your PC in order to get the filter out for cleaning.

The P101 is generous with its front IO, with 2 x USB 2.0 and 2 x USB 3.0 sockets, along with 3.5mm headphone and mic connectors, a reset switch, power switch and power button. There’s also a fan controller built into the front panel allowing you to change the speed of the included fans or even turn them off completely if silence is your goal.

The USB connectors feel well built and have a very nice looking white LED surround, ensuring you can find them when working in low light environments. They’re a little bright, but liveable. The same can’t be said for the HDD access light, however, which burns with the light of a thousand suns and is sure to illuminate your ceiling at night, which may be a problem for those wanting to run this system 24/7 in a room that isn’t purely an office.

Going back to the power and reset buttons briefly, neither are illuminated. this is a strange decision by Antex given that they did choose to light up the USB connectors. Given that the power switch has an incredibly small amount of travel (no joke, I actually managed to turn my PC off while dusting) I would have preferred to see these illuminated, or even better replace the power button so that it can’t be activated if a slightly large ant runs accross it.

Opening the door to the front of the case reveales the three included 120mm fans. No LEDs to be found here either, just some white fan fins which contrast nicely with the clean black of the chassis and complement the white accent strips which take care of airflow into the machine.

I am slightly concerned that Antec chose not to add vents to the bottom of the door or the hinge side, but I suppose if the goal is to produce a silent PC then the fewer airpaths you have, the better.

Slotted in front of the fans is a decent looking dust filter which should filter out the largest of particles making their way into the case. I’ve definitely seen finer filters on other cases but it should do a reasonable job of keeping your case clean.

The inside of the door features a piece of acoustic foam designed to reduce protuding noise from the fans. In practice this definitely has an effect, fan noise is pretty marginal anyway, but with the door shut and the fans set to low speed the case is truly silent with an AMD Ryzen 3200G and stock cooler inside.

Inside the case, the same foam insulation lines the inside of both side panels. The panels themselves have a neat latching system which does away with having to line up the panel perfectly with grooves in the side of the chassis before sliding it into lock position. It’s a feature I’d love to see on more cases and it makes getting the side panels off and on a breeze.

The inside of the chassis is something to behold, though a little odd when you consider that this case has no window in the side and will hardly be seen by anyone except the system builder. The argument couldn’t even be made that the case might be used with the side panel off because, hello, it’s designed to run silent.

The motherboard tray, PCIe covers and 140mm fan blades are all white, which does give a really clean aesthetic and actually helps the installer (or maybe I just need my eyes testing). I do find it really odd that Antec have chosen to use any colours other than black inside, surely such a move adds complexity to the construction which in the end has to be passed on to the consumer. It’s weird, but it looks so good that I’m not going to dwell on it.

Inside the case you have space for up to an EATX motherboard, but to my mind only if you choose to remove three of the four hard disk caddies leaving you with only two usable bays. Additionally, using an EATX board will render the cable management holes at the edge of the motherboard tray useless. I suppose technically you could still cram an EATX board inside, but my recommendation would be to stick with ATX.

Doing so gives you a wealth of expandability with this case. You retain a full eight 3.5″ hard disk bays (can also accept 2.5″ SSDs), two further 2.5″ bays on the back of the motherboard tray and even space for an optical drive. This might seem like a strange idea in 2019, but if the intended market for this case is workstation builds rather than home PCs then it seems sensible to include this feature for migrating legacy data.

At the bottom of the case is the PSU shroud, which boasts a reasonable 290mm of space, more than enough to house a decent sized PSU and hide any slack on the cables.

There’s a decent amount of space around a standard ATX board to allow for cable management, with cut outs at the top, bottom and side of the motherboard tray facilitating this. In my test build I found there were plenty of options for routing cables and ending up with a neat and usable result, even when running enough power and SATA cables to populate four of the eight hard disk bays.

Cable management is assisted by the inclusion of some velcro tabs on the rear of the motherboard tray, along with a decent amount of space to hide slack. I managed to fit a non-modular PSU inside the basement, along with all the connectors I didn’t need, and run all the cables for my build without it looking too messy. For those whome cable management is the be all and end all you may find the options here a little lacking when compared to something like an NZXT case, but it’s ample for a workstation type use case and should facilitate mostly neat and tidy builds.

In spite of this being a workstation-centric case you can still fit a decent sized graphics card inside if you wish, with support for up to 270mm with the HDD caddies in place and a staggering 450mm if you selectively remove the ones that are in the way. This in itself is pretty easy to do, each pair of caddies is secured to the backside of the chassis with a couple of thumbscrews. A simple job to remove and reinstall.

Overall I’m really happy with this case. It nips at the heels of similar options from Fractal Design whilst slightly undercutting them in terms of price. You do probably still get a slight quality advantage with Fractal’s latest offerings, but the P101 Silent is probably one of the best designs that Antec have put out for a while and I need to give them credit for that.

Now on to the TL:DR section:

Overall I’d give this case a solid 8/10 score. It does have some flaws but overall it’s a very impressive design and a far cry from some of the efforts that Antec have brought to market in the last couple of years.

If you’re looking for a silent case, or one with a enough storage drive space for a decent server or workstation build then the P101 Silent should definitely make your shortlist.