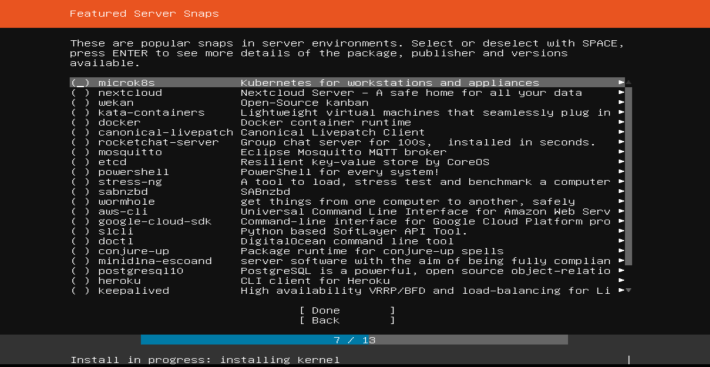 Before we move on to installing software, it probably goes without saying: Connect your power, monitor, keyboard, mouse and network cable to the server. Plug in your bootable USB key and turn on the server.

Installing Linux these days is no different to installing Windows in many ways. You’ll be asked a few basic questions about your installation and then it will set itself based on your answers.

On first boot you’ll see a bunch of text printed to the screen before landing on the following page:

Choose your language by using the arrow keys on your keyboard and then press Enter on the desired choice.

Next you’ll be asked to choose your keyboard layout:

Use the arrow/enter keys to choose the keyboard layout that matches your keyboard/locale. NOTE: Linux commands are heavily reliant on special characters – which may be in the wrong place if you select the wrong keyboard layout, so make sure you pick the right one!

Next you’ll be asked to setup your network interface…

You could easily select “Done” and move on to the next page, but stop. Selecting the default configuration will mean that your server will obtain an address by DHCP. While this is usually a good idea it does mean that potentially the IP address of your server could change if it reboots and obtains a different address from your router.

This would mean that any forwarding rules or configuration you’ve set up in later parts could go out the window each time you restart, not ideal!

I recommend that you set a static IP for your server. This is an address outside of your routers DHCP range which remains on your server even if it reboots.

To do this use the arrow keys to move up to the interface at the top of the screen and press Enter. You should see a screen which allows you to configure your network card:

Next fill in some details for your network. If you’re unsure, I’ve provided an example in the image above.

The Subnet will be the first three parts of your networks IP addresses, followed by 0/24 in most cases (you don’t need to worry too much about what this means, and in most setups you can assume this is correct).

The Address will be the IP address which you want to be “stuck” to the server. It will be the address you use to access the device’s OS and any applications you install. It should be a unique number, and outside of your routers DHCP range. I’ve selected 192.168.0.2 as this is the next available address after my router itself (192.168.0.1).

The Name Servers are your DNS servers. In most cases you can put the address of your router in this field. Your router will obtain its own DNS information from your ISP in most cases. For resilliency I’ve added a couple of public DNS servers to the list, just in case my ISPs DNS servers have a problem.

The Search Domain field, in most cases, can be left blank.

Once you’ve filled in valid information for your network, click Save, and then Done.

You’ll then be asked to provide the Proxy address for your network.

In the vast majority of home networks you won’t need to enter anything in this field. If you do it’s likely because you’ve set up your own Proxy, so enter it’s details and then click Done.

You’ll then be asked to select the Mirror for Ubuntu to install updates from. This is the online repository where additional files will be found.

Unless you have a compelling reason not to, leave this at the default and click Done.

Next you’ll be asked to confirm which hard disk you want to use and how you want to configure it:

In most cases I’d suggest the “Use an Entire Disk” option. This will automatically create a number of partitions and set them up as needed by Ubuntu.

Once you select this option you’ll see a readout of drives connected to your system:

In the virtualised example above I have three 10GB drives which I’ll use to create a RAID array in a later part. These will be for data storage. (In reality you’d need much more storage space, but for the purposes of this walkthrough it makes no difference to use small virtual drives).

The other disk shown (50GB) will be used to install Ubuntu and any apps we want to use. Assuming your setup is similar, where you have one drive for the OS and apps and other drives for data, select your OS drive and on the next page select Done:

It should be noted that on this screen there is an option to create a software RAID configuration with your other drives. I’d recommend against doing this at this point, instead we’ll do it as a seperate step in a later part of this guide.

When you click Done you’ll see a notice that any data on the drives will be deleted:

Ubuntu will now begin installing in the background. In the meantime we can continue to configure our user account details:

I’ve entered some example information in the image above. You’ll need to enter your own details. Make sure you keep a record of this information as you’ll need it in later steps. You should also ensure you use a strong password, as this password will give permissions to change just about anything on your finished system!

On the next screen you’ll be asked if you want to enable SSH:

SSH stands for Secure Shell, it’s a method for connecting to your server and issueing commands from another device on your network (or anywhere on the Internet). You’ll want to enable this, as shown above, then select Done.

Next you’ll ne asked if you want to enable any of Ubuntu’s suggested 3rd party software packages:

I’d recommend against this at this stage. A few of the examples shown are quite useful, in fact we’ll be installing NextCloud in a later part. But for now I’d recommend getting the core OS installed and configured without worrying about other applications.

Once you click Done you’ll be able to see the remaining installation tasks (the installation has been going on in the background):

Once Ubuntu has finished installing you’ll be prompted to remove the USB key and press Enter to restart:

What happens next can be a bit disconcerting if you’ve not used Linux before. The screen will fill up of text as the system reboots and reloads:

This is entirely normal, and in the end you’ll be asked to provide a username followed by a password. Enter the details you submitted during the installation and you’ll eventually get to a command prompt as shown above at the bottom of the image.

And that’s it! Ubuntu Server is now installed.

Now if you’ve not used Linux before you may be confused. Ubuntu Server, by default, doesn’t include a graphical interface. Instead you use the server by issueing commands via your keyboard.

This can be rather disconcerting if you’re not used to it, but consider that once this server is set up you generally will only be accessing its RESOURCES from other machines. You won’t generally access it directly.

As such installing a full graphical interface would be a poor use of the servers processor and memory resources, so in many ways it’s best not to install an interface.

For the rest of this part and subsequent parts I’ll be working on the basis that you’re happy working from the command line interface shown above, but if you want to install a graphical interface then I’ve added how to do so in the last page of this part.