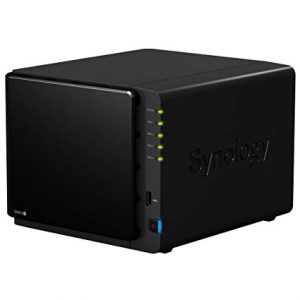 Back on the old Tech Made Easy site Synology were one of the first manufacturers to offer me any review opportunities, and for six years we continued to work together on reviews, news articles and competitions.  I even got to travel to Old Trafford and sit in on a press conference for DSM 6 and check out some of their latest products, and my Synology branded foam stress cow (an homage to Synology’s UK home in Milton Keynes) still sits on my desk to this day.

It should come as no surprise then that back in 2013 I ended up the proud owner of a DS412+ NAS – a gift from Synology’s PR team after my previous NAS met a rather messy end.  In the years that have followed my DS412+ has travelled with me and sat quietly in the background of my home network, silently ticking along and servicing me in a number of ways. 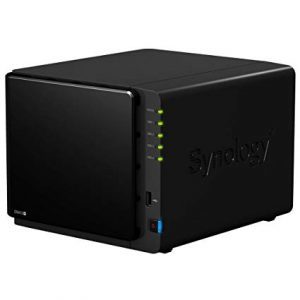 It’s lived on three continents, moved home five times and spent six months in a shipping container with the rest of our possessions while we conducted the worlds slowest house move from Nigeria to India (via the UK).

In all that time it’s never let me down, save for two hard disk failures which, thanks to Synology’s Hybrid RAID system, resulted in zero data loss.  Sure I’ve looked at later models, Synology and otherwise, and considered an upgrade, but for it’s few limitations I can’t see a valid reason for doing so.

So it begs the question; when is it time to upgrade something like a NAS drive?  In my view when the product you have no longer meets your requirements, and for me I can’t actually see that happening, at least in the short term.

So what exactly does my Synology do for me?  Well, right now it actually does a lot less than it has in the past.  In five years of ownership it’s been a media server, a file server, a print server, a VPN server, a network gateway, a backup solution, a streaming server, a torrenting client, a Usenet downloader, a web server, a cloud storage solution, a Squeezebox server, an iTunes server and a CCTV server.  All in a box that cost around 400 quid at launch.

These days it does a lot less for me.  Partly because other services have taken over some of my requirements and partly because my needs have changed.  I no longer need to monitor my home with an IP camera for instance, so the Surveillance Station app has been turned off and all of the old footage deleted to free up space.  I also got rid of my Squeezebox devices in favour of using Plex to stream music to my various devices, so the official Logitech Squeezebox app was uninstalled.

In truth the DS412+ is more or less a simple file server and media streaming device these days, with Plex Server making the absolute best of the rather meek system resources available.  The dual core Intel Atom processor and 1GB of RAM are just about enough for a single user to stream HD content and have the Plex Server app transcode on the fly to a format understandable by our SmartTV.

If more than one person tries to stream then we’re greeted with a warning from Plex that our system does not have the resources to transcode the video properly, and herein lies the only potential need for us to upgrade.

Right now my wife and I are usually content to share and watch something together.  There’s plenty that we will both enjoy and if not we’re happy to compromise.  But, we have a two year old.  A two year old who worryingly already knows how to turn the TV on and off and is quickly picking up how to navigate the menu on our Amazon FireTV box.  At some point in the very near future there’s going to be three of us arguing over what to watch, and at that point I fear it might be the end for our poor old Synology.

By comparison even Synology’s JUNIOR line now has quad core processors and 2GB of RAM – double what the professional grade DS412+ has.  What’s more the architecture on many models is angled specifically at media playback, with hardware decoding of various media files built in.

Looking further afield a HP Microserver can do more or less the same job for less money, but with a greater overhead required from me in terms of setup and maintenance.

Thankfully, it’s not a problem I have to deal with for at least a couple of years, and hopefully my DS412+ will continue to chug away in the background in the meantime. What’s clear to me though is just how good a product my DS412+ has been.  It has sat as the cornerstone of my network for over 5 years now.  Never failing, seldom changing and always ready to serve.  In the meantime I’ve gone through multiple router upgrades, several complete network redesigns and countless client device upgrades.  The fact that the NAS has just sat there working is frankly something to be in awe of, and something that I’m very thankful for.